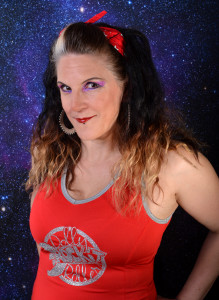 How did you get into Roller Derby?

A couple of girls I knew when I lived in London had started this new sport and kept telling me I should try it as I was a skateboarder. So I went along with Dolly to the London Rockin Rollers and thought it was pretty fun, so joined Central City Roller Girls in Birmingham in 2007. (Still didn’t really know what it actually was though! ha ha ha)

What’s your favourite position on track?

I like to jam mostly, but blocking is pretty great too… but I get muddled if I have to do both in a game!

Probably bashing my way through a pack.

What are you personally working on improving at the moment?

My fitness! I am working on my core to make myself even stronger!

What do you like to do to keep fit when you’re not doing Derby?

What do you do for fun?

Going to skateparks with by quad skates and skateboard… going to gigs… travelling to random destinations around the world.

Is there anyone who has inspired you recently and why?

Lil Crash… we bounce stuff off each other at the skatepark and use it better our skills on the derby track.

I have custom Riedell 1065 boots, I’ve had them for about 4 and a half years and they’re still going strong! I have Powerdyne Revenge plates and have managed to break the king-pin about three times (skills). I have far too many wheels, but am currently switching between my Juice wheels and my Morphs.

What is your ultimate skate out song?

Sweet Home Alabama by Lynyard Skynard… as we saw them at Rolling Sturgis in USA and we got all the RS crew to sing ‘Sweet home SlamAbama’ instead!

RANDOM QUESTION: If you could be a character in any film who would it be?

I’d wanna be Alabama from True Romance… my name was loosely based on her because she is totally her own person, a bit crazy and very strong.