Both of you just played in the Roller Derby World Cup, we have lots of questions…

1) How on earth did you sleep the day before?

Crash: I tried to get as much sleep as I could but as usual that never happens and I had to leave at 5am to drive to Manchester. I didn’t start packing until 10pm the night before!!

MayTrix: I didn’t really! We had a late practice the night before & I can never sleep after evening practices anyway but the extra adrenaline kept me up most of the night.

MayTrix: I didn’t think I was good enough to be honest & I wasn’t going to apply but I knew I’d regret not trying. At best, I’d make the team. At worst, I’d get some feedback to work on for the season. As all the applicants were spread over the world, we tried out remotely- we had to collect, create & submit video footage of ourselves that met certain criteria & this was assessed by the selection team.

Crash: I heard through various channels about playing for the World Cup but I didn’t think I was eligible or good enough and this time round I was encouraged by my team to just give it a go. What’s the worst that could happen?!

I messaged the Team West Indies Facebook page and they told me to come along to practices. I’ve been going about once a month for a year. Then in September we had official tryouts where we were judged and found out if I had made it 2 weeks later in an email.

The process seemed long as I’ve been training with the team since our first practice in June 2016 and we didn’t have tryouts until Sept 2017.

3) What did you do to train extra hard for the World Cup?

MayTrix: I started Crossfit, which massively helped with my endurance, mobility & strength. Frustratingly, due to illnesses, a minor injury & other personal commitments, I didn’t get to train as much there as I’d liked but did lots of home HIIT sessions when I could.

Crash: I started Crossfit in Feb 2017 when I realised I wanted to be serious about making the squad. I go about twice a week. I scrim once a month with high level skaters and every week with my home team. I also skate 2 times a week as part of my home leagues normal training practices and scheduled in are games every month. So I’m skating a lot of time.

I’ve also taken up running when I can fit it in! 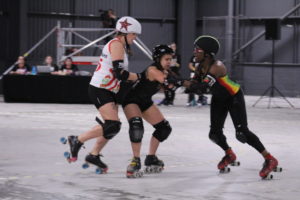 Crash playing in Team West Indies in the World Cup

4) What was it like being on that track representing your country?

Crash: I’ve always wanted to represent my mothers place of birth somehow and make a connection with the family that I have in Trinidad and it was a very special feeling to know that I was playing for the country. I just wanted to do my mom proud and represent the underrepresented countries. 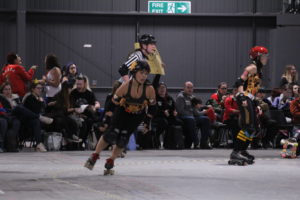 MayTrix jamming in the World Cup

MayTrix: It was incredibly special. I started roller derby to do something that wasn’t Mum related for a couple of hrs, once a week. Never in my dreams did I think I’d be in a World Cup!  It was great to have my parents there, especially my Dad who’s a huge sports fan. It was lovely to be able to honour them through something that’s special to me & make a connection between me, family & heritage.

5) Was there anyone else playing in the World Cup that really inspired you further? And why?

Crash: There are so many other skaters that played the world cup that all have their battles to overcome and every single one of them I’m sure slogged really hard to get to play at World Cup level. To be honest I was really inspired by the Junior roller derby team as this opened my eyes to the future of roller derby and the determination and vigour that they all brought that day really stood out to me.

MayTrix: Can I say the whole of Team Philippines?! The collective attitude, determination, work ethic, vision & kindness was (still is) infectious. I gained a new family in 4 days. An extra special mention for Crank Dat (expert juggler-Mum of 2, business owner, same age) & Secret Cervix- total badass (strength, skill, age). Watching them made me realise that I haven’t pushed myself enough. I can do better.

6) What was your best fan girl moment? 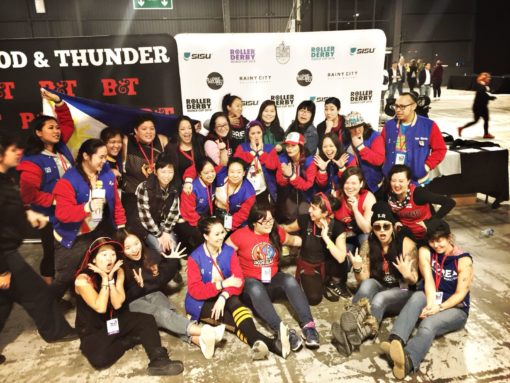 MayTrix: Hands down being in a photo with ShortStop. I got to stand next to her!!!…Then she moved but we did pull the same pose without consulting each other

Crash: It has to be telling Satan’s Little Helper that I could do one pull up and then cringing over why I’d told her that!

OK, so back to our regular questions…

What is it that drew you to roller derby in the first place?

MayTrix: I used to work with the lovely Noush who co-founded the Leicestershire Dolly Rockit Rollers & she posted something on Facebook. A little convo later, she invited me to watch a game, which I did. For the whole duration, I had no idea what was going on but I was drawn in & inspired by these strong & fierce women on track. I was compelled to find out more & signed up to the next intake.

When you are not being a roller derby super hero what do you get up to?

Crash: I am a technician/ supervisor for the 3D and art department. I also teach FE students how to make random stuff in a workshop and I teach Adobe Photoshop/Illustrator too.

MayTrix: Super hero I wish! My son keeps me pretty busy to be honest & family’s really important, so you’ll mostly find me with them & making stuff.

Do you do any other sports other than roller derby?

Crash: Crossfit. Yoga. Skipping, Is that a sport? Running.

MayTrix: Home HIIT & yoga courtesy of YouTube but currently looking at either boxing or a martial art to improve my derby.

If you can tell someone new to derby just 3 things – what would they be?

If something’s not working, get lower!

Be patient & kind to yourself. Learning something new’s a big deal! Give your brain & body the time they need to figure it out.

Enjoy every thing you do. If you fall over have a laugh. If you get 10 laps in 9 minutes do a smile.

Individually we are one drop, together we are an ocean.

What Derby plans do you have for the future?

Crash: Skate and skate some more.
Do more challenge games and scrim as much as possible.

MayTrix: Get better, skate more!
It’d be nice to head to Euro Derby Con or Rollercon at some point & I haven’t completely ruled out trying for another World Cup!