A personal year in review by Lil Crash

If anyone knows me then you will understand how hard it is to write this, not because it’s a difficult subject but because I can’t remember ANYTHING- seriously. I never have kept a diary and I have a really poor short term memory, coupled with my ‘live for the moment’ attitude I’m awful at reflecting so I’m going to try my best review the last year and arguably the most exciting in my Roller Derby career.

Just a throwback mention to August 2016 when someone mentioned I should try out for the Roller Derby World Cup. It was a thought on my mind for a long time but I was happy with my place in my home league Leicestershire Dolly Rockit Rollers and I never really took it seriously but I went along to a training session just to see how I placed and whether my skating was worthy to be deemed of world class level. The next few months were a blur because I realised I wasn’t awful at skating and I could probably give it a go. In November 2016 I was invited to go to ‘Road to TBC’ in Wales to play some super awesome contenders that would be featured in the World Cup and let’s just say that this event made me realise I was not anywhere near being a world class player!

So we are now in Feb 2017 and I’ve decided that now is the time for me to take it seriously and actually set myself a goal for once in my life- I joined Crossfit LE3 to support my decision and actually try to be fit. Early in 2017 I was been voted Team Co-Captain for the Dollies which was an actual surprise and I am super thankful for my Team for trusting me with that role because I’m not actually sure what I’ve done but I really hope I have been inspiring. If anything being Co-Captain has boosted my confidence, awareness and perseverance and not just in Roller Derby but in my personal life too and I’m an advocate for RD crossing over into personal lives for the better.

Timeline of the games we’ve played: (It all merges into one giant game of Roller Derby Life for me so apologies if I get this completely wrong!).

Jan 2017 – We got smashed by Nottingham Hellfire Harlots 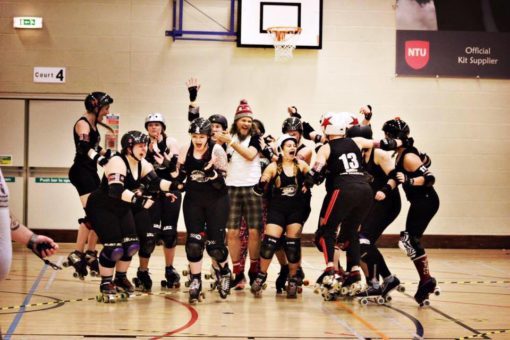 Feb 2017 – We played our absolute hearts out agains Nottingham Roller Girls (NRG) and nail bitingly won. If you weren’t there you should of been. I actually remember this game and it was so tense until the last minute as our friendly rivalry with NRG has resulted in the last two games being lost by us so we really needed to win to boost our confidence and we did!

March 2017 – We played Hulls Angels and we didn’t really know much about them at the time but we took a great win. I think we were still on a high from NRG.

April 2017 – Sheffield Steel was the next opponent in the British Champs. Again another really tense game where we lost by 6 points. I think this was the game that I was properly the Captain for – having to go in the middle and everything. It was a testing time for me and I tried to hold it together and not show anyone that I was feeling like an absolute failure. 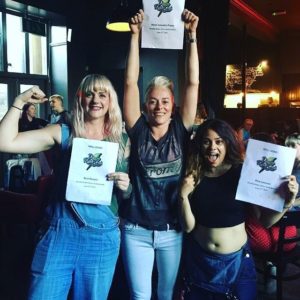 My cross training was really hard and I felt like it had affected my skating performance. I really thought I was back to being a complete novice on roller skates and I’ve skating all my life so I have never really felt the true meaning of not being able to skate as I don’t ever remember being a beginner as such but I felt this was and I needed to work this out.

May 2017 – We played Wolverhampton which was a great game to boost my confidence as we won and I realised I could actually skate!

June 2017 – DOLLY ROAD TRIP! We ventured to Dundee in our infamous minibus. If you haven’t been on a Dolly road trip you haven’t lived. We all really bonded in a mansion in Dundee which was an amazing experience to be part of and I love my Dolly family for being so kind and open and brining their game. Although we lost this game in roller derby points we won this game in team bonding points and I really felt like this was something special.

July /August 2017 – We won against Sheffield Hallam & Milton Keynes respectively which I think was a direct impact of our team dynamic and how tight we’ve become as a unit. 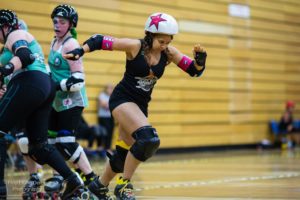 Sept 2017 – We were invited to British Champs Playoffs were we met Granite City for the first time in 7 years and lost out by a few measly points. In terms of my home career in skating it has been absolutely amazing and I couldn’t think of a better team to have played all these games with and actually have positive outcomes.

Along side the British champs other things actually happened. In February I went to skate some ramps with Moxi skate team, totally in awe the whole time and just happy to improve my cross skating game. Click here to see me skate down a ramp into some foam 😆

In the summer I went to see London Roller Girls play USA Roller Derby which was crazy inspirational. I was also fortunate enough to be coached by some of the top roller derby athletes in the world. Me and Slam skated some ramps in our city centre and we had a training session on a car park roof top. Click here to see the city centre skate park 👊 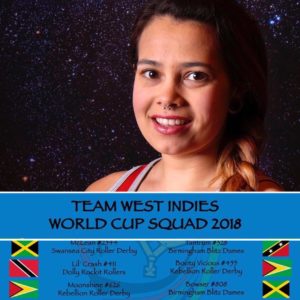 I made the Team West Indies World Cup Squad!

I skated 30 mins to a park in the rain just to do a few laps and I’ve skated 5km around our local cycle track.

Thinking about it now I’ve done lots of really cool stuff on skates this year.

Autumn approaches and as you may or many not know I have also been training roughly once a month with Team West Indies roller derby and after over a year of doing this they actually did proper tryouts. I thought every session I went to was me trying out so in some weird way I’ve been pushing my skating abilities every time💪 . After a tense wait they decided that I am actually worthy of being a world class athlete (lolz) and I made the cut!

Most of the Dollies got matching team tattoos and I was fortunate enough to be featured in a Leicester Police video on tackling hate crime (click here to see the video). 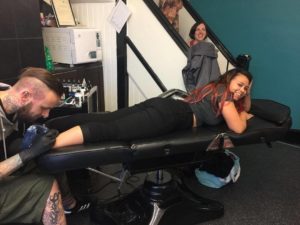 Getting a Rockit Tattoo with the Dollies

So my year ends here. I’ve really enjoyed reflecting on my last year maybe I’ll do it again sometime but don’t expect me to remember it like this. I’m looking forward to another British Champs with an amazing hard working bunch of Dollies, skating another 5km, doing more street skating, having a go at Crossfit comps, running more than 5km and doing a handstand push up. Oh and also playing the best roller derby I have ever played in my life in the World Cup, Manchester in February 2018.

A few stats if your bothered; 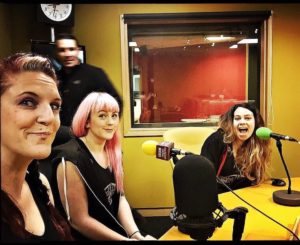 On the radio a few hours before we played NRG